SHERLOCK HOLMES AND THE SILVER EARRING 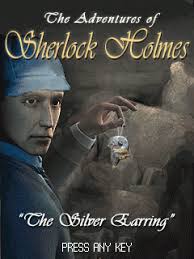 I am sorry but this is not going to be an orthodox review.  Frustration to the max!  FF!

First of all the Game would not open on my Main (hooked in) screen, but insisted on opening on the laptop (my computer) screen!  No matter what tricks I tried.  I got info on settings to try from a Support team, but these didn’t work.  It opens just fine – just not in the right screen.  So I have to play the game on the smaller screen which is placed to the side of my desk on an angle and back from the edge.  Can’t be helped – it’s the way the desk is shaped.  So I have to lean in for hours which is very hard on the back.  Okay that is not the fault of the game you say.  But it is a fault of the settings within the game that it won’t recognise a Main Screen.

So putting that frustration to one side, when I began to play there seemed to be no instructions.  I muddled on for a while, using my logic, and cursing the cursor which didn’t seem to be placed in the right places – it opened doors of rooms from inches away.  For example a door upper screen left was opened by a hand symbol that would only appear as the cursor when it was in the middle screen.  As a result of this weird phenomenon I found myself in the hall when I meant to enter the Dining Room, and worse still in the Ladies’ Powder Room from which I could not extricate myself!

My fish pond began to look inviting as a repository for the Game!

Eventually I discovered that if I Right Clicked it opened an Inventory window that let me access a Map, Documents, and Interviews reports.  Meanwhile I was stuck in a room with Sherlock who stubbornly refused to collect obvious things or leave the room, and was no help at all!  So, after a few attempts at closing and resuming to no avail, by using the ESC button I Exited the game and looked at the UHS Hints site shown below this blog.  Although it doesn’t have Walkthroughs for ALL games, with no pics just text and links, it is always worth checking as the Hints are given in increments so you can check as much or as little as you like.

At first I just checked the general Hints discovering that there is an order in which this game should be played – in other words the room I got stuck in was the very last room I should have looked at.  You can play this game as Sherlock and as Watson by clicking on their icons on the map.  You interview people by doing likewise.  Just don’t expect the icons to be in any logical place, although of course most of them are.  When you just cannot see how to interview someone, move the Cursor around until it picks up their icon over on the edge of the screen far away from them.  Nightmare stuff!

Of course as I am writing this, I can see how funny it is.  But it isn’t when you are playing it.  Nothing works properly all of the time – just some of the things some of the time.  It needs to be said that I got stuck again twice more despite trying to follow the right order of play.  Each time I got a bit further, and interviewed heaps more people.  Then the wrong door would open when I clicked the hand, and I’d find myself stuck in another room.  So Exit and try again!  And again!  Luckily I realised that I could fast forward, by clicking the text, through the dialogue by the third time or I might not have been accountable for my actions.

The Graphics are good, as far as I could tell on the small screen.  The story is interesting.  the Game-Play method is a little unusual but could be fun – if everything worked as it should.

I haven’t finished the Game.  I haven’t even got past the first stage of interviewing all the people at the murder scene.  And I’m dreading going back in there and trying AGAIN! Aaaaaaaaaaaaaaaaaaahhhhhhhhhhhhhhhh!!!!!!!!!!!

So my recommendation to you is . . . um . . . er . . . well you could give it a go and see if you have the same problems I’ve had.  Bear in mind that I do have Game-Playing experience.  It’s not like I need ‘Game Playing for Dummies’ – though wouldn’t that be a handy book?!  Maybe I should write it.

For Walkthroughs of this Game try UHS Hints at:   www.uhs-hints.com/

I write reviews of Adventure and Hidden Object games that are Crime, Fantasy, SciFi, Renovation, Travel, Quest and/or Mystery by genre. I have a Masters in Writing (2006) and have been writing novels, both crime and fantasy for many years; plus Haiku, verse, and prose both fictional and literary. I am also an artist of modern, Acrylic, textural and hard edge work, underwater, fantasy, expressionist, and Cosmos paintings. I use mixed media (Acrylic, Watercolour, Pastels) in textural Monoprints, finding surprises to expose within each work. Having both an analytical and creative mind has meant that I have strong powers of observation, and the persistence required to follow computer problems through till I solve them. Of course I am not always successful, but am willing to ask for a little help in order to then unlock the main problem myself. My Troubleshooting Blog, 'Problems and Solutions', was the result of my tenacity.
View all posts by judsartwork →
This entry was posted in CRIME & MYSTERY, SHERLOCK HOLMES GAMES and tagged Crime Games, Crime Games - Troubleshooting, Detection, Detective, Hidden Object Games, PC Adventure Games Crime, Point & Click, Sherlock Holmes, The Silver Earring. Bookmark the permalink.

1 Response to SHERLOCK HOLMES AND THE SILVER EARRING