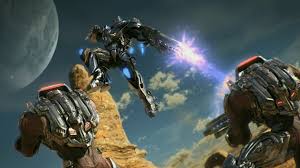 I want to say from the outset that there is a real crossover between SCiFi and Fantasy Games.  You may find therefore that some of the games I have put into this Category lean towards Fantasy, but also contain definite SciFi locations and tasks.

Narrative ‘fantasy’ has various forms:
High Fantasy such as J R R Tolkien‘s THE LORD OF THE RING trilogy, a Myth-based Fantasy, set in a self-contained secondary world, Middle-Earth, an earlier time for our world.
Sci Fi Fantasy set on alien planets in space – Ursula Le Guin’s The Dispossessed; set on Earth with alien invasions – Julian May‘s SAGA OF THE EXILES series set in our future and past Earth with insinuating Alien populations; and a humorous combination – Douglas Adams ‘five part trilogy’ The Hitch Hiker’s Guide to the Galaxy.
Realistic Fantasy using temporal and spatial alterations in the same ‘real’ location, usually on Earth, incorporating ghosts, psychic phenomena, and dreams – Daphne du Maurier’s The House on the Strand.

I realise there would be differing views on this statement, which really just illustrates my point – the line between SciFi and Fantasy is blurred.  But to facilitate Player access, I wish to isolate the SciFi and Fantasy Games as a Category in my Sidebar list, as there are quite a few now among the reviews I have done, and more among those I have yet to write  – my test-play and notes are stockpiling!

The thing they always have in common is their great attention to graphics!  Fantastic, colourful, imaginative, exciting and visually stimulating worlds to explore.  They are a vital component in the addiction factor and the satisfaction factor, which causes eager anticipations and expectations in the game-player.

Many times the opening footage that leads to the Main Menu has me gasping WOW.  It is an excellent game indeed that follows through with the same degree of graphic excellence within the game.  Many are spoiled by stupidly exaggerated atmospheric touches, but occasionally there is a gem, which draws you back to play again and again.  Give me more of those, please.

I write reviews of Adventure and Hidden Object games that are Crime, Fantasy, SciFi, Renovation, Travel, Quest and/or Mystery by genre. I have a Masters in Writing (2006) and have been writing novels, both crime and fantasy for many years; plus Haiku, verse, and prose both fictional and literary. I am also an artist of modern, Acrylic, textural and hard edge work, underwater, fantasy, expressionist, and Cosmos paintings. I use mixed media (Acrylic, Watercolour, Pastels) in textural Monoprints, finding surprises to expose within each work. Having both an analytical and creative mind has meant that I have strong powers of observation, and the persistence required to follow computer problems through till I solve them. Of course I am not always successful, but am willing to ask for a little help in order to then unlock the main problem myself. My Troubleshooting Blog, 'Problems and Solutions', was the result of my tenacity.
View all posts by judsartwork →
This entry was posted in FANTASY, SCI-FI and tagged aliens, bigfish games, elephant games, Fiction, Games; Reviews, Hidden Object Games, J. R. R. Tolkien, Jud, Julian May, Lord of the Rings, Middle-Earth, Mission games, PC Adventure Games, PC Fantasy Games, Point & Click, Puzzle Games, Quest games, SciFi, Screen Resolution. Bookmark the permalink.