MYTHS OF THE WORLD: THE HEART OF DESOLATION – Collector’s Editon 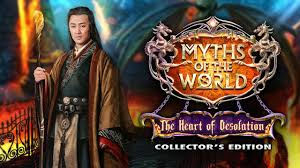 Story:  It was just supposed to be a routine mission. Fly in, drop supplies, and fly out. But when a dragon attacks your plane, crash-landing in a lush valley, you’re drawn into the adventure of a lifetime! This ancient valley is filled with living, breathing dragons – guardians of nature who protect the weak. But when one of their own becomes possessed by their ultimate foe, it’s up to you to restore order. Can you defeat the Dragon King’s mighty terracotta army, or will the world be destroyed once more, just like it was centuries ago? (Big Fish Sales Blurb)

The Game opens with the EIPIX Video first, followed by the Sound Video.  You then have the Main Menu to explore.  Play takes you to another Video this time Myths of the World with the focus on this new game backstory; followed by the opening Video showing the current crisis facing you and the World.  You can click the screen to fast forward past the first two Videos, and click the (X) button top right to Exit the next two Videos.

Options: Good with Auto-Widescreen.  It also has an Info button Top Right that gives you Cursor and Desk-Top Icon details.

Main Menu:    This is a visual feast, and very user-friendly – all is clear and worth exploring before you click Play, which in turn helps you set up your Profile, Modes and Story choices before plunging you into another opening scene.  There are Facebook and Twitter Links in Top Right of screen; plus More Games that opens to allow you to scroll sideways through the EIPIX selections – if you click on one it will drop you out of the game (putting Icon for re-entry on your Tool Bar) and onto the Big Fish sales page for that specific game.

Music & Voice-Overs:    These are great!  The Music complements the setting perfectly, yet isn’t too intrusive – it doesn’t take over so you don’t feel the need to keep turning it down more and more.  The Actors/Voices are well-suited to their Characters, which is also enjoyable.

Extras:    Play Bonus Game; Play HOP; Music; Play Puzzles; Souvenir Room; Art; Collectable; Mahjong; Golden Heart Puzzles. Any Collectables missed during play,  and all the bonus Souvenir Room Items (50), you can collect after both games are completed.  This is Fun!

Tutorial:   This is immediately Optional with Variations, and is well designed, quick, non-intrusive, informative and, as I always say, worth checking.  You can of course just have the special features Tutorial.

Graphics:    As you can see immediately above – the Graphics are spectacular!  It seems impossible that they can continue to improve from the previous games, but somehow EIPIX manage to do this.  The colours are sparkling, brilliant, gorgeous – Creating Worlds is their Logo and how right they are.  It’s very difficult to describe how it feels to immerse yourself in such gloriously colourful, evocative, artistic settings, that are integral to the story and the game-play.  Amazing stuff.

Troubleshooting:    I need here to mention that some players – those with 27″ screens – may experience pixellation of the Video components, including the Character Dialogue foreground components.  I contacted EIPIX and they responded:

I’ve consulted with the producer about this problem you have, and we came to conclusion that problem might be in your screen resolution. We are making our games for 1280 * 768 screen resolution and your is bigger than that, I presume. That is SD type of graphics that we do in agreement with Big Fish Games and their standards. We were making HD games in the past but that turned out bad because HD games were much bigger than current one. Now our games will take 800 – 1000 MB of space on your computer but if we were making with HD version our games would have been twice as large than they are now and people with lower performance computers wouldn’t be able to play our games. That the only reason why we do that, simple optimization, because we want to make our games available to a bigger group of people, we want everyone to enjoy in our games. 🙂

I have Windows 8.1 on Bootcamp on my OS X iMac computer, though also with a 27″ screen, so I re-downloaded the game there and played it.  This improved/diminished the pixellation considerably.   I have tried the Demo Game on the Mac part of the Mac  🙂  to see how that version plays, and it’s a great improvement.  There is still a little pixellation in the Opening Movies, but this is very minimal.  And the Foreground Character Dialogues are now almost normal.  So thumbs up for the iMac.

Play Modes:    Casual; Expert; Insane; Custom.    I now use the Custom Mode wherever I find it so that I have the greatest control over my Game-play.  It’s so great to be able to disable the Penalty component that I call Overclicking Punishment.  EIPIX are considering axing this among many other possible improvements for Player Satisfaction – see my HATS OFF TO EIPIX! blog –  https://judsgamereviews.wordpress.com/2015/04/04/hats-off-to-eipix/

Map:  Interactive, of course.  But it is done on a Scroll as painted miniatures of each scene, with an Info Key so you understand at a glance where you are and which are the active scenes, plus Page Up & Down Arrows to access old and new locations.

Collections:   Ancient Bamboo Strips (42) that complete various storylines within the game; Morphing Objects within the HOPs, the missed Morphs can be collected from the ‘Play HOP’ in Extras upon completion of games.

HOPs:   These get better and better.  There are Interactive Lists (which were so innovative when they first came out – oh how we loved them); Silhouettes (ditto); but now they are totally Combo Hidden Object Puzzle games!  You collect Listed or Shaped Objects which you use on other Objects to find more Objects that open new Lists, then perhaps Riddle Items, until you finally end up with one Item.  Ta-Daaaa!!!!  You may Pan from side to side, or Zoom in and out, play  Mini-HOP on it’s own or inside the main HOP.  But in the main HOPs you also need to find a Morphing Object.  These are not easy to find as they are not consistent in content – I wish they were as this at least gives you more of a chance to spot them.  I had to complete my Morphing Object search via the ‘Play HOP’ in Extras upon completion of both games.  And I will admit it took me a few turns at 3 of them to finally find the Morphed Items.  But these HOPs are seriously great fun!

Puzzles:   Once again these are on the whole fantastic, innovative, and definitely not boring – except for a few that took too much time, and seemed unsolvable – I could feel myself growing older as I played them.  I especially liked the Rune Puzzles and the Golden Heart Puzzles – which are solvable and really make you think as they become more difficult.

Game-play:   Such a complex game and story.  The Game-play moves relatively quickly, and you seem to resolve the crisis at hand, only to find at the last minute that you have been fooled.  And the game goes on.  This was how the previous HOTW game played – but this is a positive, because you feel as though you are actually achieving as you proceed, and of course know that when you hit adversity you can recover and continue.  It keeps your playing mood positive despite set-backs.  And the story keeps you well and truly hooked! It is complex, logical, linear, with clearly defined villains and heroes, and most importantly it’s embedded into the Game-play, driving the game forward.  The Character Dialogues are also important not just for the story but in order to give you vital info for your searches and Tasks.

Player Participation:   Full On!   You are continually involved throughout the entire game, not just in the convoluted HOPs, but also gathering and utilising Items wherever you go, back and forth, revisiting scenes, creating Potions and Magic Dust, unlocking, opening, repairing, assembling, destroying, replacing, defending, healing, exploring, interviewing, and resolving.

Satisfaction Factor:   Satisfaction is an under-statement!  This game is immensely enjoyable in so many ways – in fact in all the ways I’ve mentioned in all the other categories, and that includes the after-play in the Extras.  This game is Addictive – you do not want to stop playing until you complete it, but as it is quite long, you eventually concede and Exit unwillingly.

Frustration Factors:   These are only caused by mouse control as you slip out of a scene or HOP by accident – often due to fatigue – and by the pixellation, which becomes less important is you become gripped by the game itself.

I highly recommend this game to all Fantasy fans and especially to all EIPIX fans.  What a ripper!

I write reviews of Adventure and Hidden Object games that are Crime, Fantasy, SciFi, Renovation, Travel, Quest and/or Mystery by genre. I have a Masters in Writing (2006) and have been writing novels, both crime and fantasy for many years; plus Haiku, verse, and prose both fictional and literary. I am also an artist of modern, Acrylic, textural and hard edge work, underwater, fantasy, expressionist, and Cosmos paintings. I use mixed media (Acrylic, Watercolour, Pastels) in textural Monoprints, finding surprises to expose within each work. Having both an analytical and creative mind has meant that I have strong powers of observation, and the persistence required to follow computer problems through till I solve them. Of course I am not always successful, but am willing to ask for a little help in order to then unlock the main problem myself. My Troubleshooting Blog, 'Problems and Solutions', was the result of my tenacity.
View all posts by judsartwork →
This entry was posted in ADVENTURE, FANTASY, JUD'S VIEWS & TROUBLESHOOTING, TROUBLESHOOTING PC GAMES, UPDATE and tagged Big Fish Games, Dragons; Portals; Terracotta Warriors, EIPIX Entertainment, Glorious Oriental Fantasy Graphics, Hidden Object Games, Jud, Myths of the World: The Heart of Desolation - Collector's Edition, Point & Click, Puzzle Games, Quest games. Bookmark the permalink.