A few thoughts on CSI Games 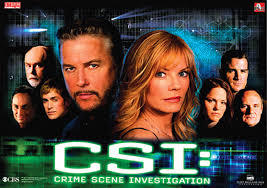 I’ve been revisiting them lately and find that they are still the most enjoyable formats of Crime games I’ve played.  I love them.  You play as an adult.  You are treated as an adult player.  The crime scenes are just that, with bodies, destruction, evidence, suspects, laboratories and diagnostic equipment, interview room, multiple suspects and their locations, and even a morgue.  They are not games for children.  They have not been sanitised, for fear of upsetting the player, into a bland and boring game.  I know that there are other Crime games out there – the LAW AND ORDER games; NICS; CRIMINAL MINDS; SHERLOCK HOLMES; NANCY DREW and a whole gammut of Fantasy Crime games that I’ve played and own – but none of them measure up to the CSI game format.

It’s not just the storyline format and engaging content that is so satisfying, though both contribute significantly to the whole experience – the 4 separate and distinct Cases that culminate in the combination of their characters for the 5th Case creates a resolution to the set that feels complete.  I like that upon completion of the 5 Cases you can then revisit any of them in whichever order you wish, missing out your less favourite if you choose to focus on your most favourite; or if you only have time to play one Case you can pick one out and do so.  This eliminates being locked into having to proceed from the 1st Case and finding that if you want to play a little CSI you keep playing the first game over and over.

I know that the Graphics and technical developments in game production have streaked ahead since the last CSI game FATAL CONSPIRACY was released for PC and Mac markets, but those presented in the CSI Series still hold their own.   The 3D CG characters gradually improved as the Series progressed, as did the attention to detail in the settings and backgrounds. How wonderful it would be if Tell Tale Games could produce a Patch to upgrade the Graphics for the existing Series [similar to the ReMastering of one game of the MYST series].  Long-term CSI games fans deserve to be considered, not shoved aside for the ‘latest thing’ in game-play.

I am not a fan of Online game-play, nor of Free-to-Play games which of course are not free.  I’ve tried enough of them to know that they are a shadow of the Standard PC/Mac game downloadable or disc version.  I don’t want to play a truncated game.  I want the full playing experience.  What has that to do with CSI?  Well now the only CSI games being produced are for Online publication.  I have appealed to their publisher, Ubisoft, to issue those games as downloadable/disc versions also, but received an automatic negative response- brushed off as a trivial enquiry.  Even a contact of mine within Ubisoft was unable to assist as the publishing and marketing policies were fixed.

Tip: The earliest games are still best on XP or reset Windows 7, but the rest play best on Windows 7.  I’ve tried the last two on Windows 10 but the Graphics were a little too pixelled for comfort.

Update:  I installed my copy of FATAL CONSPIRACY which included a couple of Auto-Patches onto my Windows 10 computer to see if it Play the game without any glitches. Unfortunately, although the Graphics were really good generally, the audio/dialogues were out of synch, continually over-lapping, and juddering occasionally.  As the characters talked over each other, it was very annoying.  I found I couldn’t bypass the dialogue, and noticed that the characters’ mouth-actions were a little jerky.  Initially, I couldn’t turn off the Tutorial, but managed to via MENU OPTIONS after a few false starts.  Also the Mouse/Cursor action is rather quick and so a little hard to control at times.  The only Pixelled Graphics were in the DNA testing in the Laboratory.  I doubt I’ll try DEADLY INTENT on the Windows 10 computer, but if I change my mind I’ll let you know the results.

Tip: You cannot play the earlier version if your QuickTime is higher than 6.1 – it is only needed for the first game anyway.  However if your computer has QuickTime on it it will interfere with the first 3 or 4 games so that they are unplayable.  My advice is to remove it from your computer and only load version 6.1, or play the CSI games on an older computer with a similar QuickTime version.  The later games will play fine.

Please do check out my CSI blogs in Archives and also those in Troubleshooting as I have written and updated several that are relevant to the CSI games.

If you agree with me concerning the sad lack of CSI games now being produced for fams of the fuller PC/Mac downloadable/disc versions, please comment, let me know, add force to my pleas to Ubisoft.  If you have had more luck than I’ve had re this issue please let me know what and how.  If you have an email/contact address for TellTale Games that I can use to contact them, please pass it on to me.

I write reviews of Adventure and Hidden Object games that are Crime, Fantasy, SciFi, Renovation, Travel, Quest and/or Mystery by genre. I have a Masters in Writing (2006) and have been writing novels, both crime and fantasy for many years; plus Haiku, verse, and prose both fictional and literary. I am also an artist of modern, Acrylic, textural and hard edge work, underwater, fantasy, expressionist, and Cosmos paintings. I use mixed media (Acrylic, Watercolour, Pastels) in textural Monoprints, finding surprises to expose within each work. Having both an analytical and creative mind has meant that I have strong powers of observation, and the persistence required to follow computer problems through till I solve them. Of course I am not always successful, but am willing to ask for a little help in order to then unlock the main problem myself. My Troubleshooting Blog, 'Problems and Solutions', was the result of my tenacity.
View all posts by judsartwork →
This entry was posted in CRIME & MYSTERY, CSI & NCIS GAMES, JUD'S VIEWS & TROUBLESHOOTING, TROUBLESHOOTING PC GAMES, UPDATE and tagged Crime Games, CSI, CSI games, CSI Problem Solving, Detection, Jud, telltale games, Ubisoft CSI. Bookmark the permalink.

10 Responses to A few thoughts on CSI Games