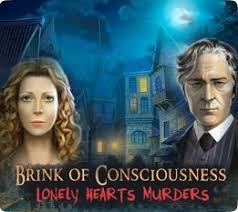 How far will you go to save your only daughter’s life? Is there a limit? Help Owen Wright rescue his daughter from the clutches of the Lonely Hearts Killer, the mysterious figure who kidnaps and murders people who have suffered a love gone wrong. Unravel the intrigue, put a stop to the whirlwind of crime that has paralyzed this late 19th century British city. Olivia must live! The killer must be brought to justice! Only you can do it! (BigFish sales blurb)

This game has good Options, and the choice of Casual/Normal/Expert Modes of Play.  It has 3D CG characters to direct and follow throughout the scenes.  You search Hidden Object scenes, and find Items randomly strewn amongst the various scenes.  Sometimes you find yourself wondering why an item would be in the particular location, especially when it is something secreted and requiring Puzzle solving to access it.  Also this game requires a great deal of going back and forth between scenes – there is a basic Map, that shows you where active sites are and special Objectives needed to move you forward in the game, but you cannot jump to the site you want within the Map.  You must come out and cross the scenes till you reach it.  This can be tiring, and a little tedious.

The Graphics are a little hazy all the time, which is aggravating, and makes physically seeing what you are doing more difficult – who cares about players with sight problems it seems?!  But the graphics are well designed, and conceived, giving a really Authentic Period feel to the story.  The Dialogue between the characters is very important, not only to the forward movement of the plot, but also to that of the Game-play.  I really like the way the story episodes/chapters are so well integrated into the game.  Plus the story is a straightforward Crime game, moving at a different pace from most HO games, with an intriguing plot that has you continually second-guessing the murderer’s identity.

Despite the few minor negatives, I bought this game, and recommend it to crime game fans.