Story:  The Christmas magic continues… with the next in the blockbuster series from Elephant Games! You adopt a forlorn kitten on Christmas Eve, but little did you know what that innocent cat would get you into. It seems a thief has ransacked Santa’s purrrfect little toy town, stealing the Christmas star! Why would anyone want to stop Christmas from coming? (Big Fish Sales Blurb)

This story is fun and flows well, with plenty of twists.  I really liked the way it brought it showed the Russian Folk-lore that’s linked to Father Christmas.

Options:  This is good and has Gamma setting.

Music:  This is really good, enjoyable, not overpowering, though as usual I turned it down so it became background and allowed the Sound Effects to be heard.

Voice-Overs:  These were really good too – suited their characters perfectly. Extras:   Concept Art; Music; Achievements; Collectibles; Screensaver; Bonus Game; Wallpapers;Secret Room.
You have to mouse-over the scene to locate them.  The Secret Room has 3 Cats in it, each with 3 HOPs for you to replay.   I felt ripped off – usually you get all the HOPs in their own section, plus Mini-Games and Puzzles in theirs, plus a Secret Room where you get to find something from each game scene.

Tutorial:  This is helpful and you can choose just to have the Special Features tutorial or all or none.

Play Modes:  Kitten; Santa; Puss in Boots; Custom Cat.  I chose the last one which had plenty of choices for me to set.

Map:   This was also colourful and Christmassy, and had a snowflake on the Hotspot sites so you could save time and jump to them.

HOPs:
There could have been more of these and less Puzzles.  Lists; Story HOPs; Search; Place items from inventory;

Puzzles:   Quite good overall.  The Tool Search with the Lens was interesting, and there were lots of little things like that.  In the Bonus Game the Cat Face Rotation Puzzle was really clever.  There are a couple that required dexterity, but I managed those though they annoyed me.

Game-play:   Using Cats as the Characters puts this into the Kids Game Category.  However you easily shrug this off and slip into the story.  There’s the expected seek and find of missing items, unlocking various equipment in order to move forward physically through the terrain.  Lots of going back and forth – made easier by the interactive nature of the map.  And it is a fairly long game – which is always good. 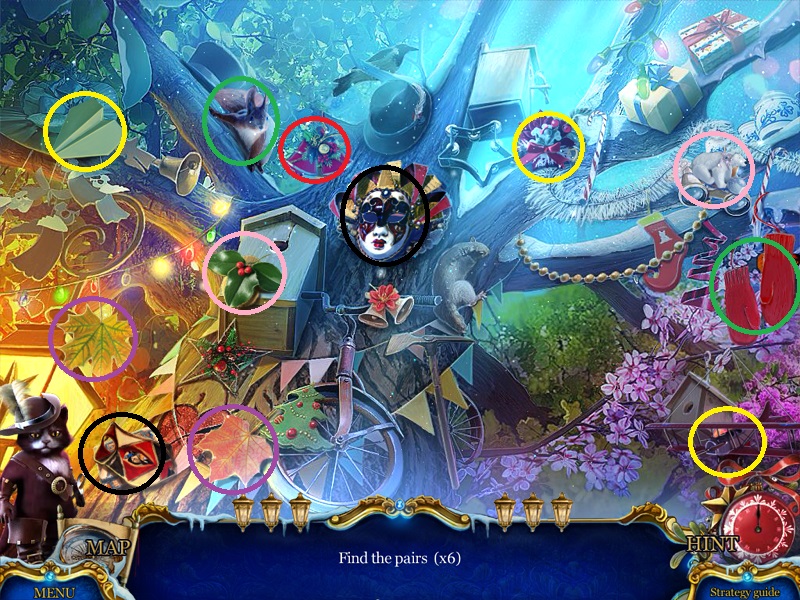 Bonus Game:  This is also long, which is great – and it made up for the lack of other Game-Playing Extras in the Bonus Content.  More of the same activities, with another twist to the story.  And it resolved neatly, as had the Main Story.

Player Participation:   Total.  You don’t stop, pausing only to interact with the characters as they gave you the next Task.

Frustration Factors:  This was minor, and mostly involved  the occasional lack of direction – but usually a glance at the Map fixed that.  There were odd things – like realising who you had to give something to when it seemed a little ‘left field’ and not quite logical.

Satisfaction Factor:  Overall this game  was quite satisfying.  The Stories – both Main and Bonus – drove the Game-play, and were fun even though they were Cats!  Luckily I love cats.  It might be a bit annoying for someone who doesn’t.  But their characters were cool, as were their snowy settings. 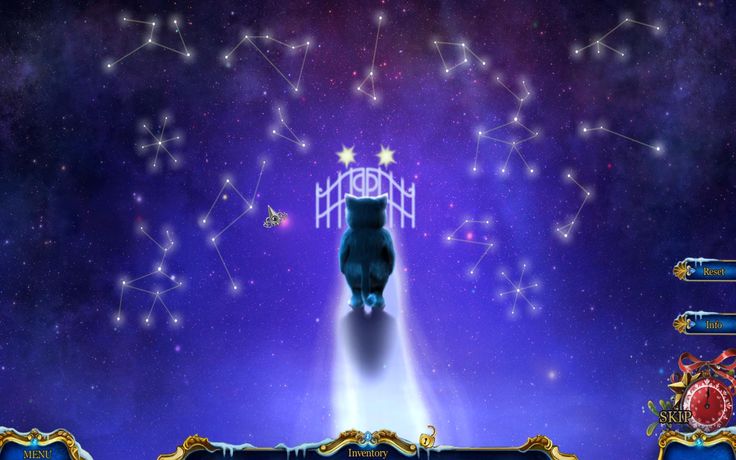 I highly recommend this game to all Christmas Story lovers.

I write reviews of Adventure and Hidden Object games that are Crime, Fantasy, SciFi, Renovation, Travel, Quest and/or Mystery by genre. I have a Masters in Writing (2006) and have been writing novels, both crime and fantasy for many years; plus Haiku, verse, and prose both fictional and literary. I am also an artist of modern, Acrylic, textural and hard edge work, underwater, fantasy, expressionist, and Cosmos paintings. I use mixed media (Acrylic, Watercolour, Pastels) in textural Monoprints, finding surprises to expose within each work. Having both an analytical and creative mind has meant that I have strong powers of observation, and the persistence required to follow computer problems through till I solve them. Of course I am not always successful, but am willing to ask for a little help in order to then unlock the main problem myself. My Troubleshooting Blog, 'Problems and Solutions', was the result of my tenacity.
View all posts by judsartwork →
This entry was posted in ADVENTURE, FANTASY, STORY-BOOK GAMES and tagged CHRISTMAS STORIES: PUSS IN BOOTS - Collector's Edition, ELEPHANT GAMES; BIG FISH GAMES, FELINE XMAS FUN!, Games; Reviews, Gorgeous Fantasy graphics, Hidden Object Games, Jud, Point & Click, Puzzle Games, Sparkling snow-scapes. Bookmark the permalink.